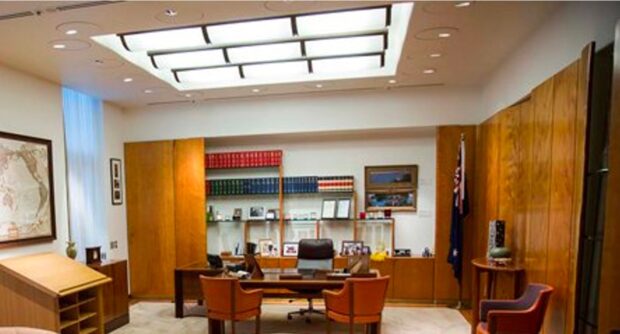 Heading straight for Parliament House after arriving back from Tokyo, Anthony Albanese was surprised to walk into his new office today to find that it hasn’t been occupied since mid 2018.

“It’s just how Malcolm Turnbull left it,” he commented, noting a half-drunken bottle of 2002 Chateau Latour Bordeaux and an empty tin of caviar. “There’s even a scrunched up copy of the National Energy Guarantee policy in the bin”.

Albanese said a letter from Turnbull welcoming Scott Morrison to the Prime Ministership lay unopened on the desk, covered in a thick layer of dust. Several letters from Pfizer marked ‘urgent’ were also wedged underneath the door.

When asked whether Scott Morrison ever used the office, a Parliament House worker said she wasn’t familiar with that name. “Josh Frydenberg used to come in here once in a while to take photos of himself at the Prime Minister’s desk. And Barnaby Joyce used to sleep in here occasionally after a big night, but otherwise it’s been empty,” she said.