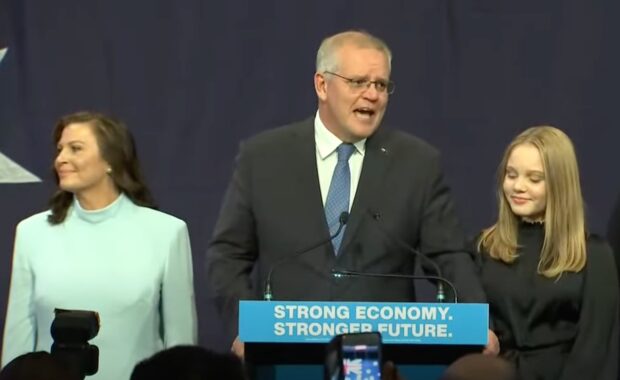 A disappointed Scott Morrison says it was his wife’s idea to lose the 2022 election and has assured supporters she would take full responsibility for the result.

In an emotional concession speech, Morrison said the loss would be hard to take for Liberals, but conceded that the person responsible for the defeat was standing up on stage in front of them, gesturing towards Jenny.

“I’ve always been big on responsibility. And it’s pretty clear that the person responsible for us getting totally wiped out tonight is the woman standing next to me right now.

“Three years ago, Jenny and I sat down, and she said, ‘Scott, I’ve got an idea. Why don’t you totally fuck up a vaccination rollout, put the country a trillion dollars in debt, refuse to investigate corruption, turn the nation’s women against you, do nothing on climate change, go on holiday during the nation’s worst bushfires and launch a first-home-buyer policy that will increase the cost of homes?’ And I said, ‘If you say so boss!’ And the rest, as they say, is history”.

The outgoing PM said if it was his choice he would have done things differently. “Obviously I would have won the election if it were up to me. But I’m not in charge, it’s not my job. So there’s no point blaming me”.