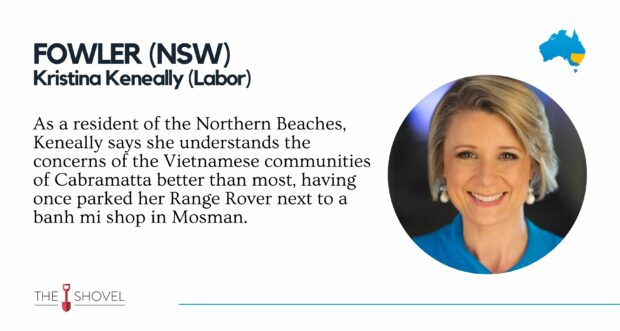 Main opponent: The commute from the Northern Beaches

Profile: As NSW Premier, Kristina Keneally oversaw the biggest loss by a sitting state government in NSW history. Eager to learn new and interesting ways to lose elections, she was immediately snapped up by federal Labor.

Keneally became a Senator in 2018 after failing to win a by-election in the North Shore seat of Bennelong in 2017. When a vacancy emerged in the lower house seat of Fowler, in the centre of Sydney’s Vietnamese community, Labor showed its commitment to diversity by preselecting Keneally – the party’s first middle-class white woman with an American accent.

Some within the party were angered that more favoured Vietnamese-Australian candidate Tu Le was overlooked. But, as a resident of the Northern Beaches, Keneally says she understands the concerns of the Vietnamese communities of Cabramatta better than most, having once parked her Range Rover next to a banh mi shop in Mosman.