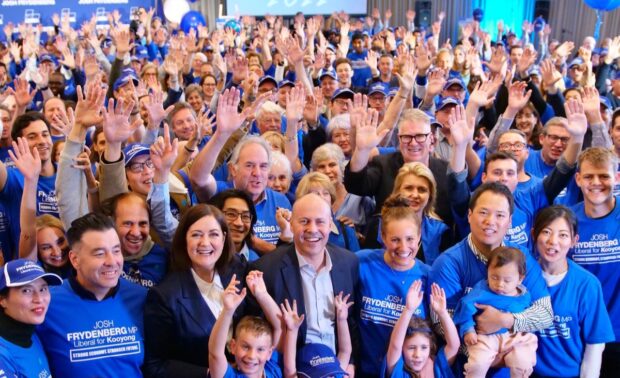 Treasurer Josh Frydenberg has personally thanked each of the 60 billion local residents who came to show their support at his Kooyong campaign launch yesterday, as he outlined a plan to maintain a budget surplus while keeping GDP growth at 25%.

Frydenberg – who faces a serious challenge from independent candidate Monique Ryan – said there was a ‘sea of blue’ at the 500-seat capacity function centre in Hawthorn.

“If each of the 60 billion people here go out and tell two friends to also vote for the Coalition, and then those people each tell another two people, then I think we’ll almost get to the sixty thousand or so votes we need to maintain a majority in Kooyong,” he said to a smattering of applause.

Frydenberg warned that a vote for independents was a vote for chaos and disorder. “Just imagine if we’d had a hung parliament during the vaccine rollout, or the AUKUS negotiations, or Robodebt, or the bushfires, or the floods. It would’ve been an absolute shitshow”.

Polling shows Ryan is ahead in Kooyong, but Liberal Party sources say they are confident of holding the seat.

UPDATE: Josh Frydenberg’s office has conceded it made a mistake in its attendance estimate. The actual attendance figure was 321. Mr Frydenberg says it is basically the same and is nothing more than a rounding error.

Get your 2022 Election Armchair Guide