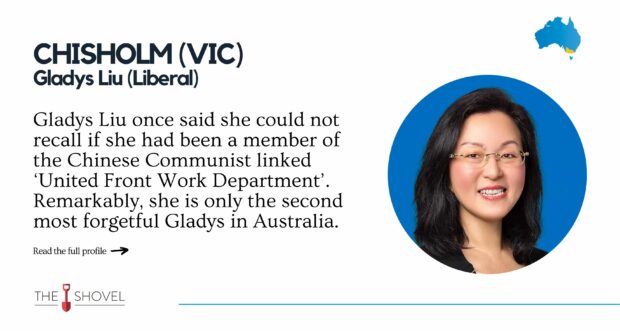 Profile: Gladys Liu once said she could not recall if she had been a member of the Chinese Communist linked ‘United Front Work Department’ between 2003 and 2015, or whether she had met an alleged Chinese spy who she was photographed sitting next to in 2016.

She later claimed she could not recall if she was the member for Chisholm, conceding she had heard of the electorate but claiming she wasn’t aware of its day to day activities. Remarkably, she is only the second most forgetful person named Gladys in Australia.

Liu won Chisholm at the 2019 election by a razor-thin margin. It was later revealed she had installed Chinese-language signs at polling booths, designed to look like official AEC signs, which read ‘the correct way to vote is Liberal’. In a court-case after the election, the Liberal Party agreed that the sign was misleading, but no more misleading than another sign next to it which read “Scott Morrison: a leader you can trust”.