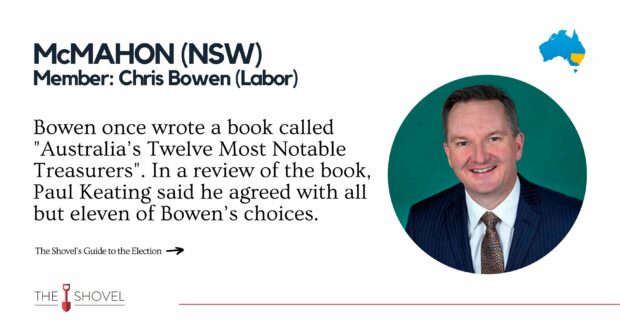 Profile: The electorate of McMahon is named after William ‘Billy’ McMahon, who until recently was regarded as Australia’s worst Prime Minister. He’s now ranked fifth worst.

Chris Bowen has held the seat since 2004. A senior member of the Labor Party and a former Treasurer, Bowen once wrote a book called Australia’s Twelve Most Notable Treasurers. In a review of the book, Paul Keating said he agreed with all but eleven of Bowen’s choices.

In 2013 he wrote another book titled ‘A Blueprint of Modern Labor’ which detailed contemporary ways for the Labor Party to unexpectedly lose elections.

Bowen describes himself as a keen supporter of the Greater Western Sydney Giants. He is hoping the other GWS supporter will vote Labor as a result.