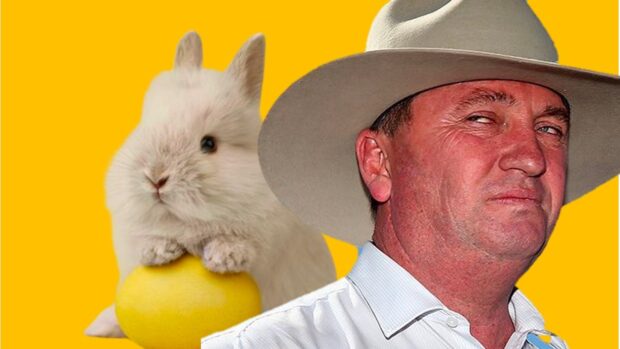 Saying he is on the side of farmers, Nationals leader Barnaby Joyce has emphasised his willingness to do whatever it takes to get rid of the well-known pest Easter Bunny who invades millions of homes across the country at this time of year.

“I want the voters of New England to know that I am willing to shoot the Easter Bunny right in its adorable face to help stop the spread of this invasive species” the Deputy PM promised.

Shortly after tearing away any child’s sense of wonder, Barnaby explained the reasoning behind the policy. “Look we don’t need a pest like this, hopping all over Australia, laying its eggs, proliferating. Look at what happened with cane toads, and Johnny Depp’s dogs. Now I see bloody Yorkshire terriers everywhere, I have to send the kids out in the backyard to pour salt on them!”

Joyce’s critics have suggested that he has another motive for shooting the Easter Bunny. “We heard someone say that rabbits breed like Barnabys and he just doesn’t want to appear to be second best at anything this close to the election,” one insider said.

The rumour mill has suggested the Easter Bunny could be parachuted into New England after defecting to One Nation. The party seems like a perfect fit for the chocolate-toting rodent after its social media posts came to light accusing Jesus of “arriving in Australia by donkey instead of coming by the right channels”.