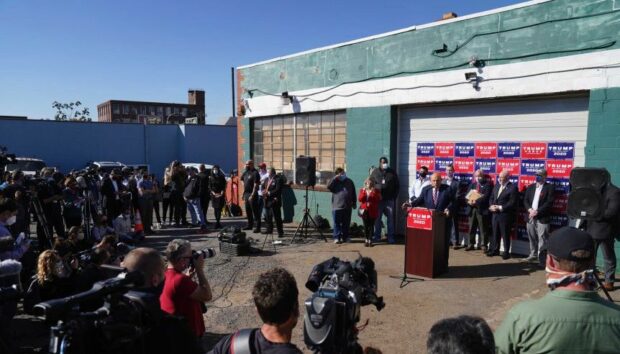 The team of people who booked a Presidential press conference in the carpark of Four Seasons Total Landscaping instead of the Four Seasons International Hotel, say they have uncovered a complex scheme of vote tampering and fraud.

“You have to believe us when we tell you that we’ve exposed one of the greatest frauds in American history,” the people told the media while standing outside of a run-down warehouse next to a sex shop.

Pausing to allow a dump truck to drive through the industrial estate, which is situated opposite a crematorium, a spokesperson for the group said that it took a keen eye and an attention to detail to spot what was going on with votes right now. “Not everyone can see it. But if you cross your i’s and dot your t’s like we do then it’s as clear as day,” he said, moving aside to allow a landscape contractor past to pick up supplies.

He said further details of the fraud would be revealed at tomorrow’s press conference, to be held at Sheraton Concrete Cutting & Demolition.