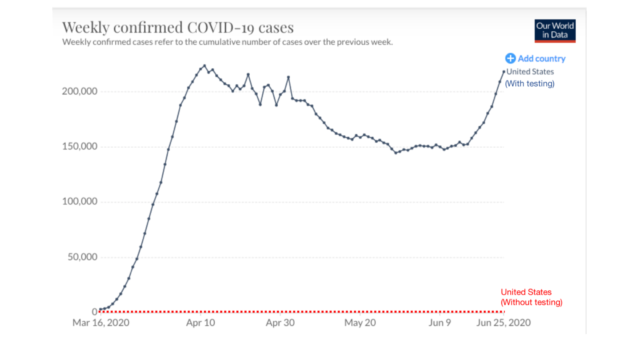 Donald Trump’s recent claim that testing rates have exacerbated the coronavirus in the US appear to be correct, with new analysis suggesting America could have avoided the virus entirely if they had eliminated testing from the beginning.

America’s well publicised spike in cases (labelled on the graph in blue) is the result of thousands of daily tests across the country. But the line in red tells a very different story. This represents the number of coronavirus cases America would have had if testing had been eradicated early.

Trump administration officials have called it a ‘sliding doors’ moment. “Had we got on top of this thing early – right back at the start – and eliminated testing from day one, we’d be in a very different situation right now,” one official said.

“But instead we let it get away from us. The number of tests has exploded, and look what’s happened to the number of people infected as a result. The graph doesn’t lie.

“If we can get these testing numbers down, then we’ll be able to return to life as normal”.