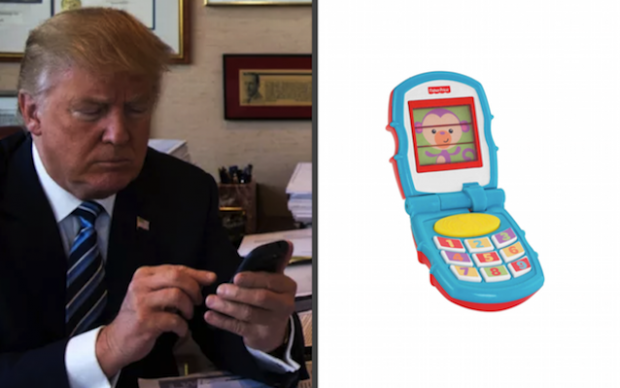 Advisers for Donald Trump have sneakily swapped the President-elect’s phone with a plastic Fisher Price device, which they say he can use while he is still learning how to be an adult.

“He’s probably not quite ready for a big boy phone just yet,” one aide said. “With this one he can play around and pretend, without having to worry about accidentally making any actual calls or accidentally severing ties with China”.

The aide said the ‘My First Phone’ had lots of fun sounds and colours, which Mr Trump was already enjoying. “We’ve even put in some pretend ‘speed dials’ to people like Vladimir Putin and Kim Jong-un, so he can get tips from Russia or ‘re-establish ties’ with North Korea whenever he feels like it”.

She said there was no need to tell Mr Trump that he wasn’t actually speaking to foreign leaders. “It’s just a bit of harmless make believe. We’ll get the adults to do all the important diplomacy stuff in the background. It’s much better for everyone that way”.