In a treat for Winter Olympics fans, Russian President Vladimir Putin will personally re-enact every gold-medal performance from the Sochi games in a specially reconfigured main stadium.

The news was revealed in leaked documents earlier this morning, Sochi time. According to the documents, some events – such as figure skating and curling – will be performed simultaneously, adding an extra wow factor. 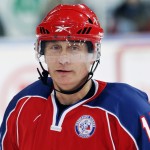 Mr Putin, who is good at everything, decided not to compete in the games themselves out of respect for up-and-coming participants. But organisers say he wants to thank fans by putting on a closing show to remember.

Like the flamboyant opening ceremony, which featured an all-male choir dressed as policemen, the closing ceremony will be strictly heterosexual.