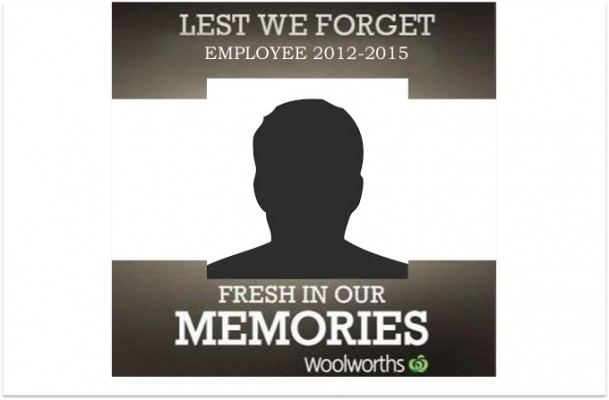 Supermarket chain Woolworths has followed up its much talked about ANZAC promotion with a moving new campaign that honours the memories of those who lost their jobs as a result.

Once again using the slogan “Fresh in our memories”, the campaign features poignant pictures of marketing team members, some barely in their 20s, who had promising careers at Woolworths ahead of them, before being hit by a massive marketing fail.

“They really are fresh in our memories,” one division member said. “It seems like just yesterday that Jennifer was right here beside me in the trenches, firing off emails, and launching experiential campaigns”.

A spokesperson for the company said the fallen comrades should be treated with respect. “Without these people, it never would have been possible to associate fresh fruit with dead soldiers. We’ll never forget that. We’ll always remember them”.

Money raised from the campaign will go to the supermarket’s bottom line.