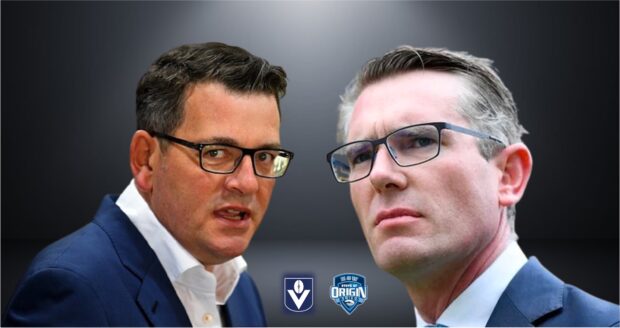 Pundits are struggling to pick a winner in this year’s Corruption State of Origin as the two sides go head-to-head in a battle to see who can more comprehensively fuck over their constituents through the use of nepotism, fraud, bribery and just run-of-the-mill shithouse behaviour.

NSW has enjoyed an unbeaten run in recent years, with names like Berejiklian, Maguire and Obeid going down in Origin folklore. This year’s series looked headed for another easy NSW win after former vice captain John Barilaro skilfully created a $500k-a-year job in New York and then awarded it to himself – dubbed an early contended for corrupt move of the series.

But Victoria hit back yesterday, with an onslaught of corruption, branch-stacking, nepotism, forged signatures and misuse of public money, leading some commentators to suggest the southern state might edge in front. “It was an awesome display. I particularly loved how the Victorian captain then suggested he was unaware of any of the behaviour – giving everyone the don’t argue. That’s Origin at its best,” one commentator said.

Just as Victoria felt they had their rival’s measure, NSW responded late with a finding that journeyman John Sidoti had lobbied a council to rezone his parent’s properties.