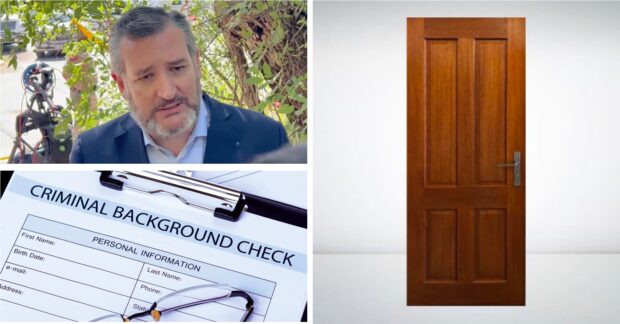 Saying it was the only way to stop the senseless school shootings, Texas Senator Ted Cruz has introduced a bill that would require Americans over 18 to undertake an extensive background check before purchasing a new door, or other entrance-way facilities.

Cruz, who blamed last week’s shooting in Uvalde on the abundance of doors at the school, said the number of doors in the US had been allowed to increase unchecked.

“Do you know how many doors we have in this country? Over 1.8 billion. More than six doors for every man, woman and child in America. That’s 1.8 billion opportunities for a crazed killer to commit one of these massacres, and it’s time we stand up to Big Door and other vested interests and say ‘enough!’”

Under the proposal, Americans wanting to buy a door would have to undergo a background check, wait four weeks before receiving delivery of the door and then keep the door locked at all times, with the key kept in a separate area. Larger doors will require a licence and those with a history of mental health problems will not be allowed to access doors at all.

A spokesperson for Mom’s Against Doors (MAD) – a Republican-aligned lobby group – said background checks for doors was the only way America was going to see a reduction in the number of school masacres. “When my son goes for a playdate at his friend’s house, I have to ask the parents if they have any doors and, if so, where they’re kept. I don’t want my kid growing up in a country like that”.