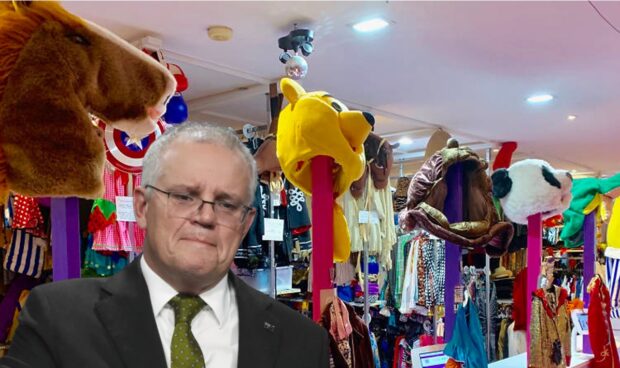 A sombre Scott Morrison has headed to The Shire to clear out his office this morning, sorting through some of his favourite costumes from the last three years in office.

Creating ‘keep’, ‘throw out’ and ‘maybe’ piles, Morrison often stopped to gaze into the distance as the memories came flooding back.

“Ah … the welding costume where I flipped the helmet up on my head and almost burnt my retinas,” he said, lovingly placing it into the ‘keep’ pile.

“And here’s the pilot costume I wore when the country was in lockdown and some people couldn’t travel more than 5km from their homes. Such fun!

“Oh and look … here’s the costume I wore when I dressed up as a hairdresser and stroked a stranger’s head. God, I’m going to miss this job”.

As the task stretched into the third hour, Morrison decided to create a separate pile just for sporting costumes. “The rugby league costume, the rugby union costume, the cricket costume, the tennis costume, the basketball costume … oh and here’s the costume I wore when I flattened a seven-year-old child. Of course he was off-side, so he deserved it.

“Oh, Jenny come and look at this one. Here’s the costume I dressed up in when I pretended to help out in Lismore by sweeping a basketball court for four minutes, a fortnight after the floods. Do you think that should go in the ‘sports’ pile, or the ‘pretending to work in a national crisis pile?’”