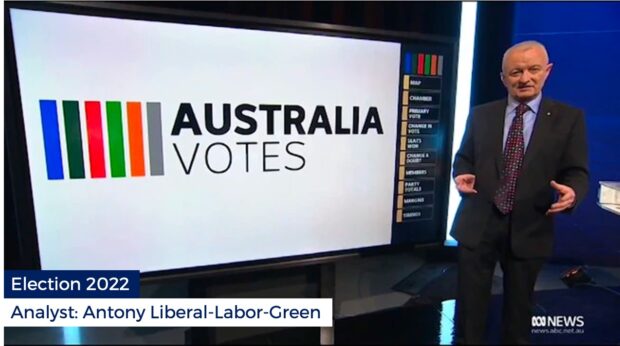 The ABC has directed its star election analyst Antony Green (now known as Antony Liberal-Labor-Green) to change his surname in order to avoid a perception of bias which could spark further cuts in government funding. Some have already criticised the new name, with senior Labor MPs questioning why he had chosen to preference the Liberal Party.

“This is just another example of the ABC cowering to the Coalition for fear of retribution. Clearly he’s done a preference deal with the Libs,” one Labor frontbencher said.

Nationals leader Barnaby Joyce has demanded at least two of the seven letters devoted to the Liberal Party be set aside for the National Party. “We’re in negotiations for the ‘a’ and the ‘l’ to be set aside as Nationals letters. If we can’t get agreement on that, we’ll pull our support. That’ll mean he’ll be called ‘Antony Liber-Labor-Green’ which doesn’t quite have the same ring to it, does it?”

The United Australia Party said the new name was proof you couldn’t trust any of the major parties. “We’ll pay Antony $20 million to change his last name to ‘Freedom’. That’s what Australians want,” Clive Palmer said.

One Nation leader Pauline Hanson said she was pleased her party had been recognised with the first spot. “The white bit after his first name is clearly a nod to our policies”.