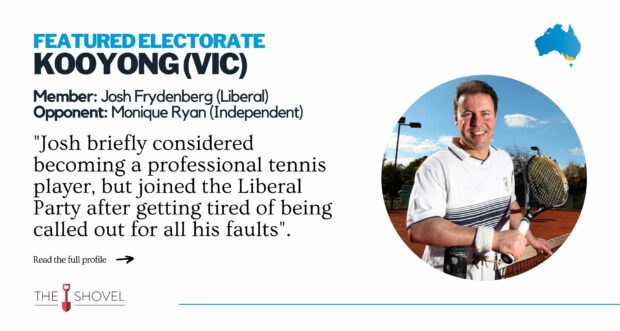 Location: Eastern suburbs of Melbourne, like Hawthorn and Kew

Profile: Kooyong is a blue-ribbon seat that has been held by the Liberal Party since its inception. Robert Menzies held the seat of Kooyong for 32 years; he was Prime Minister for 58 of those.

Since 2010 the seat has been held by Josh Frydenberg. As a young adult, Josh briefly considered becoming a professional tennis player, but joined the Liberal Party after getting tired of being called out for all his faults. Nothing has been his fault since.

Frydenberg quickly rose up the ranks, becoming Treasurer in 2018. In 2022 he misplaced $60 billion, but who, hand on heart, can say they haven’t done that before? To his credit, Frydenberg later apologised for the miscalculation and said the $60 billion would be split evenly between all 248 million Australians.

At the last election Frydenberg argued strongly against abolishing negative gearing, pointing out that most of the people in his electorate who use negative gearing have a taxable income of less than $10 and own just 14 houses.

This year Frydenberg is up against ‘teal independent’ candidate Monique Ryan. A former paediatric specialist, Ryan decided to switch to federal politics because she wanted to spend even more time working with children.

The Liberal Party has encouraged voters to keep Josh Frydenberg this election on the compelling argument that ‘Kooyong belongs to the Liberal Party’. If it loses it will make a Mabo land claim as traditional owners of the electorate.