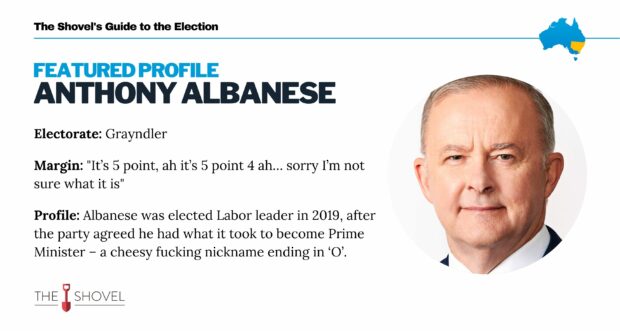 Profile: Anthony Albanese grew up in a housing commission flat in Camperdown in the 1970s and has never mentioned it since.

He joined the Labor Party as a student, and then went off to get some life experience in the real world, trying his hand at all sorts of different jobs within varying arms of the Labor Party.

After winning pre-selection for the seat of Grayndler in 1996, his first federal election was a closely-fought battle against the No Aircraft Noise Party (NAN), a single-issue party who fundamentally misunderstands how aircraft work.

In the first Rudd Government, Albanese was given the position of ‘Minister for Infrastructure and Transport, Minister for Regional Development and Local Government and Leader of the House of Representatives’. It was later revealed that Albanese had used his contacts in the union movement to negotiate a salary that was directly tied to the number of letters in his job title.

In the Gillard Government Albanese was again appointed Leader of the House, which he reminded colleagues was bigger than the housing commission house he grew up in during the 1970s.

After Labor’s loss at the 2019 election, Albanese was elected leader unopposed, with party members agreeing he had what it took to become Prime Minister of Australia – namely a cheesy nickname ending in ‘O’.

In his three years as Opposition Leader Albanese has been criticised for not offering a clear policy alternative to the Coalition Government. But he strongly rejects that assertion, pointing to stark policy differences.

While he supports coal mining, for example, he says Labor offers a more ‘fair go’ approach to climate change, with a plan to ensure that all Australians suffer from the effects of climate change equally. “Climate change should be for everyone, regardless of where you grew up or what school you went to,” he said last year.

On immigration, he says that Labor will continue to torture asylum seekers, but in a more compassionate way. Speaking out against the treatment of the Biloela family last year he said, “Under a Labor government, this family would be held for two years on an island without any social interaction or hope of release, except we’d change the name to ‘processing’ rather than ‘detention’. Our policy couldn’t be more different”.

And while he has offered support for the Coalition’s plan to dramatically lower taxation for high income earners, he argues that it’s because Labor needs to get back to its roots of supporting ordinary, hard-working millionaires. “When people think of Labor and what it stands for, they think of lending a hand to those grinding out a living in the top tax bracket. Ordinary families trying to put food on the new table that they bought for the holiday house in Palm Beach,” he said last year.