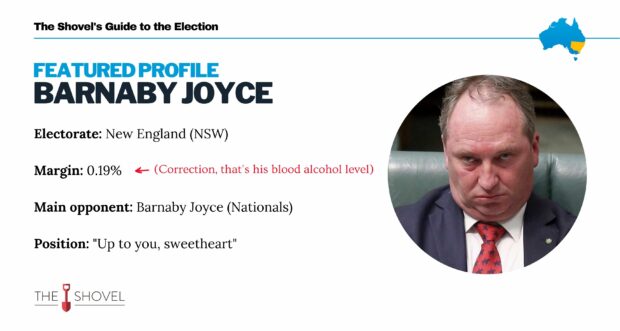 Profile: Barnaby Joyce is a New Zealand accountant who likes to dress up as an Australian farmer (but then, who hasn’t got their fetishes?)

Joyce began his political career as a Senator for Queensland. Dismayed at only being the 14th most insane politician in the state, he moved to New South Wales and contested the seat of New England.

In 2018 Joyce had a much-publicised affair with his staffer, Vikki Campion. Annoyed by the media attention, he immediately organised a tell-all interview with Channel 7 to call for privacy.

It was later revealed that Vikki Campion was pregnant, although Joyce initially said the child may not have been his. His colleagues later confirmed that it probably wasn’t, given Joyce had never conceived anything during his 15 years in Parliament either.

Joyce has previously called for there to be an English language test for migrants. His speech to Parliament on the issue is yet to be translated, although an original transcript of the speech reads, “Yeah, fair dip bonza binka woop along the winding track, mate. Yeah-nah the blighty bunga can or yamba turn – it just makes common sense”.

In 2019 Joyce was involved in a controversial Government purchase of $80 million of water. He later revealed it was to cure a thumping hangover.

Last year Joyce forced a spill in the National Party to return to the leadership role. Australians were relieved when they learned ‘Barnaby spill’ referred to his leadership ambitions and not his bodily fluids.