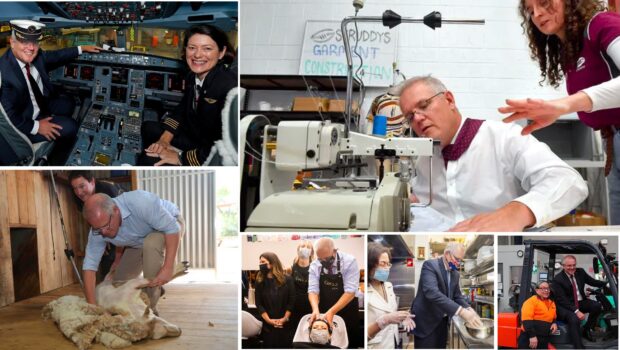 A new Federal Government initiative, modelled on the successful ‘Bring Your Child To Work Day’, will see Australians encouraged to bring their little Prime Minister with them when they go to work, so he can see what it’s like first hand to do a full day’s labour.

Employment Minister Stuart Robert said the program was a chance for the Prime Minister to learn what the adults do all day, in a safe and managed setting. “It’s like Bring Your Kid To Work Day, but with more dress-ups,” he said.

“We’re keen to get Scott into as many workplaces as possible before the election, so whatever your line of work is, consider bringing Scott along. Manufacturing, agriculture, obstetrics – they’re all great. But obviously if it involves distinctive uniforms, big machines or dangerous equipment that’s preferable”.

Robert insisted the time commitment for the workplace would be minimal. “We’ll be in and out in ten minutes. Just put Scott in the uniform, put a lethal tool in his hand and point him at something flamable. Once we get the photo we’ll be out of your way”.

To apply to have Scott Morrison at your workplace, visit the $20 million Scotty Has A Go website.