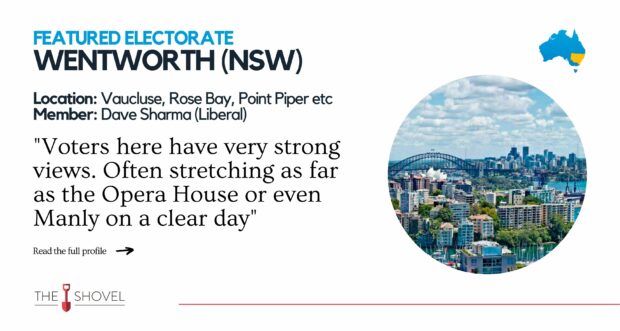 Profile: Despite its demographic of cashed-up bankers and high-flying billionaires, Wentworth has built a reputation in recent years for its ‘small-l’ liberal social conscience. There’s a strong sense of social justice here – a belief that the less-fortunate residents of poor areas like Darlinghurst and Surry Hills should also have access to fine art dealers and trust fund accountants.

The old stomping ground of Malcolm Turnbull, voters here have very strong views, often stretching as far as the Opera House or even Manly on a clear day. So it’s not surprising that one of the key issues here will be the removal of the ugly and unnecessary headland of Potts Point, which totally gets in the way of the view of the Harbour Bridge.

This election is a contest between sitting member Dave Sharma and independent candidate Allegra Spender. There are many similarities between the two. Remarkably, both achieved perfect scores in their year 12 matriculation. They have both advised that they won’t be able to come to their election night party because they have to study.

Both attended Cambridge University, which means they are equally in touch with the everyday aspirations of Britain’s aristocracy.

Sharma worked as a diplomat; Spender worked as a consultant at McKinsey and Co. So they both have extensive experience in giving the impression of saying something important while actually saying nothing at all.

Both claim to be strong supporters for action on climate change, although weirdly Sharma joined a political party that relies on the vote of Barnaby Joyce and Matt Canavan. Whoops!

Wentworth was held briefly in 2019 by independent Kerryn Pehlps, a former head of the Australia Medical Association. In the 1990s Phelps was a regular guest on Channel Nine’s show Sex. She decided to enter politics so she could see close up how Australians are fucked.