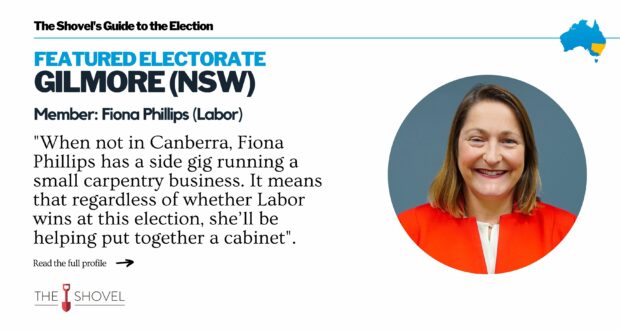 Profile: Fiona Phillips entered Parliament in 2019 after defeating Liberal candidate Warren Mundine, who was parachuted into the seat at the last minute. Apart from being a former president of the Labor Party, not living in the electorate and not actually being a member of the Liberal Party until the day before his candidacy, Mundine was considered to be the perfect candidate for the area. Surprisingly, he lost, and Phillips won the seat for Labor.

As well as being the member for Gilmore, Phillips has a side gig running a small carpentry business. It means that regardless of whether or not Labor wins at this election, she’ll be helping to put together a cabinet.

This year Phillips is up against former NSW state MP Andrew Constance, who briefly quit state politics in May 2020 to announce he was contesting pre-selection for the federal seat of Eden-Monaro, before changing his mind the following day, returning to state politics, then quitting again to contest the seat of Gilmore. He un-ironically says that the upcoming election is all about continuity and community.