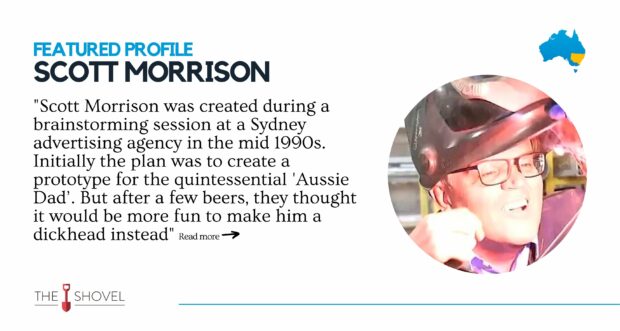 Profile: Scott Morrison was created during a brainstorming session at a Sydney advertising agency in the mid 1990s. Initially the plan was to create a prototype for the quintessen­tial ‘fair-dinkum Aussie Dad’. But after a few beers, the ad creatives thought it would be more fun to make him a dick­head instead. No-one knows where the weird Christian bit came from.

In the early 2000s Morrison had a brief career as head of Tourism Australia, where he oversaw the ‘Where The Bloody Hell Are You?’ campaign, widely regarded as one of the least successful in the organisation’s history. With tourism numbers plunging, the campaign showed that Morrison lacked judgment, pos­sessed questionable money-management skills and had a tendency to misread the mood of the nation. The Liberal Party snapped him up immediately.

Morrison entered parliament in 2007 after a questionable pre-selection process, and was moved to the shadow front bench a year later. But it was in 2012, when Tony Abbott chose Morrison to implement his ‘stop the boats’ policy, that the member for Cook’s political career really took off. Over the coming years the number of people who entered Australia was zero, coincidentally, the same number who entered Australia when Morrison was head of Tourism Australia.

After 13 months in Immigration, Morrison moved to a new role as Social Services Minister. In one of his first speeches in the role, Morrison said he wanted to search the sewage of welfare recipients to see if he could find traces of drugs. Close friends at the time said it was the clearest sign yet that Morrison’s drug addiction was spiralling out of control.

In 2018 Morrison was chosen by his party to be Prime Minister, but decided to take on a string of temporary roles instead, including a hairdresser, a pilot, a welder, a truck driver, a sheep shearer, an Indian chef, a water boy, a seamstress and a builder. He is yet to pretend to play the role of Prime Minister.

Always one to sense the mood of the nation, he put everything on hold to remove a needle from a strawberry and then went on holidays when the country was on fire.

Beloved by his Coalition colleagues, Mr Morrison has been warmly described by those who know him best as ‘a horrible, horrible man’, ‘a liar’ and ‘a complete psycho’.