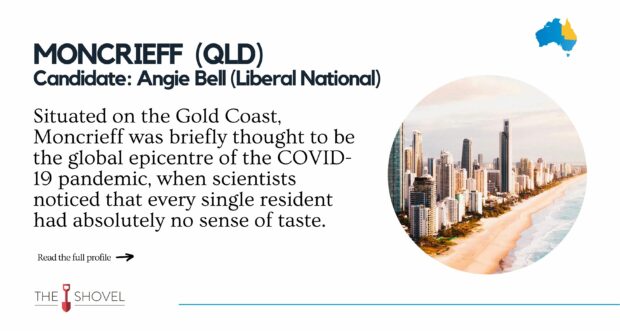 Situated on the Gold Coast, Moncrieff was briefly thought to be the global epicentre of the COVID-19 pandemic when scientists noticed that every single resident had absolutely no sense of taste. It was later revealed that they’d just spent time in Surfer’s Paradise.

Local member Angie Bell worked as a professional musician for 35 years. She then decided she’d had enough of contributing to the Arts sector and joined the Coalition so she could help destroy it instead.

Bell’s only notable moment in Parliament was when she gave a passionate 7-minute speech on the wrong bill – one that had been voted on weeks before. She is confident of winning the upcoming 1996 election.