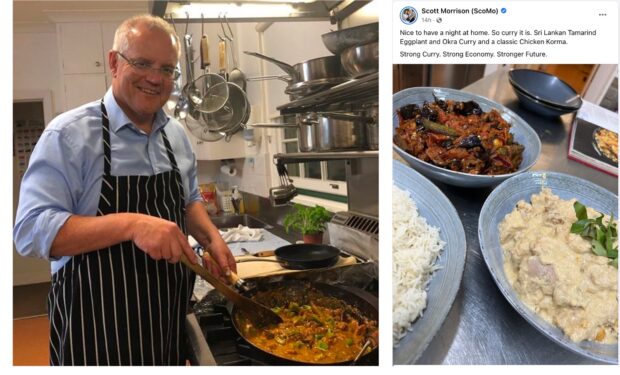 Genius election campaigner Scott Morrison has defused any negative talk of runaway inflation by showing Australians how to make a budget home-cooked meal for just $13 per person.

Posting a picture of the meal on social media, the PM said the media coverage of cost-of-living pressures was a beat up.

“At around $50 a meal, that’s just $350 a week for dinners. So when you include your other meals and essentials, there’s no reason why a family of four couldn’t keep their weekly grocery bill under $1,000. I’m really not sure what all the panic is about”.

He said the ordinary Australians he spoke to weren’t experiencing cost-of-living pressures at all. “I’ve spoken to a lot of my colleagues and they don’t know what all the fuss is about. When you get a $288 per-day travel allowance, spending only $52.14 on some chicken and vegetables for a single meal is a bargain really”.

Come to our live election show in Sydney on Wednesday and we’ll show you Scott Morrison’s secret 5-step curry recipe. Get tickets