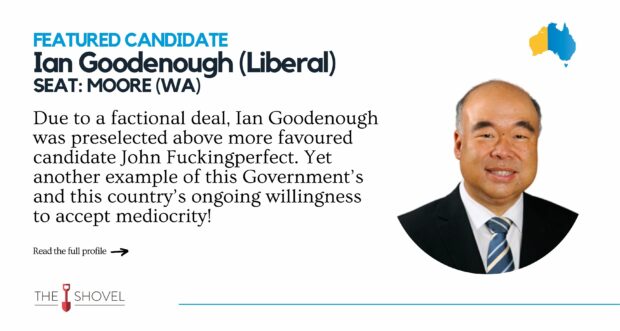 Location: The north-western suburbs of Perth around Joondalup

Profile: Due to a factional deal within the Liberal Party, Ian Goodenough was preselected for this seat above more favoured candidate John Fuckingperfect. Yet another example of this Government’s and this country’s ongoing willingness to accept mediocrity.

Since winning Moore in 2013, colleagues have warmly described Ian Goodenough’s performance as ‘adequate’, ‘sufficient’ and ‘ok, I guess’.

A member of the evangelical Church, Ian Goodenough does not support same-sex marriage and has argued that children raised by same-sex couples will suffer from mental illness. If you meet Ian, best not to remind him that Jesus had two daddies.