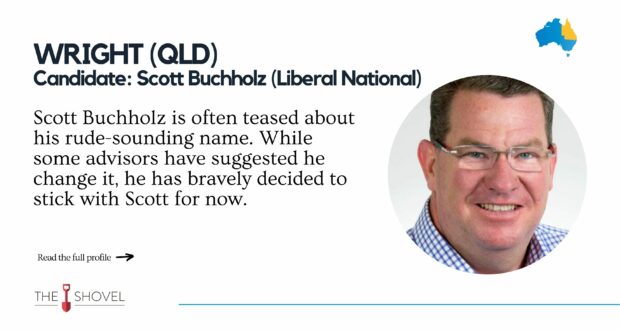 Location: The bit between Ipswitch and the Gold Coast

Profile: Scott Buchholz is often teased by his colleagues about his rude-sounding name. While some advisors have suggested he change it, he has bravely decided to stick with Scott for now.

Before entering Parliament, Buchholz worked as a staffer for Barnaby Joyce. He is pregnant with Barnaby’s seventh child.

Buchholz won pre-selection for Wright in 2010 and has been a member of the Centre-Right faction ever since. During the same-sex marriage debate, Buchholz spoke out in opposition of the law, saying “… think what would happen to those people who love their pets”.

Buchholz lives in Boonah, Queensland and is happily married to Charlie, his Border Collie.