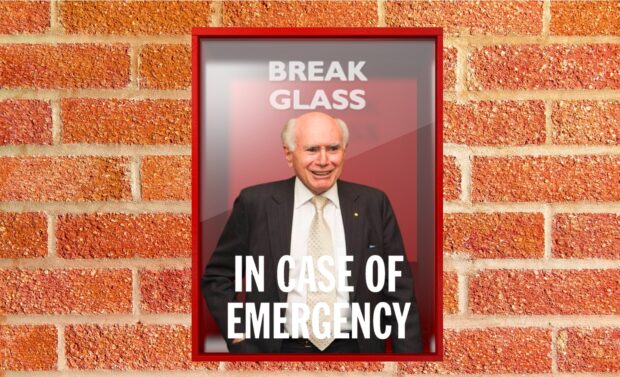 Out of options and uncertain of what else to do in the face of negative polls, Liberal Party MPs have smashed the glass and removed the little John Howard that sits on a wall at Liberal Party headquarters in Sydney.

“Emergency! Emergency!” deputy leader Josh Frydenberg shouted, being careful not to get Howard’s eyebrows stuck in the glass as he pulled the little guy out of the box.

Frantically reading the instructions as he held Howard in his hand, Frydenberg used a small key to wind up the former Prime Minister, aimed him towards the campaign trail and watched him spring to life and immediately run off to a media event to say something sexist.

“It’s incredible how quickly he’s ready to go. Wind him up, let him spray bullshit everywhere and he immediately takes everyone back to the 1950s”.

A party spokesperson said the emergency procedures were used sparingly. “This is something we definitely only use as a last resort once every federal election and at every state election and three to four times a year when we can’t think of anything else to do”.