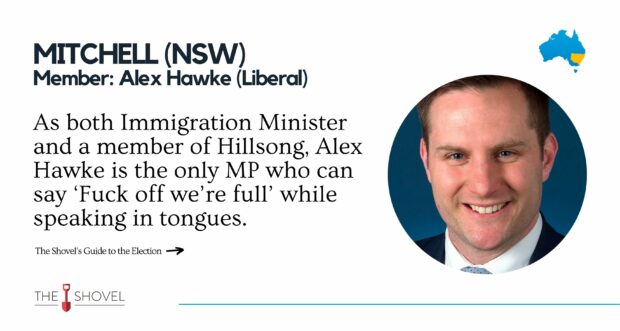 Profile: Alex Hawke once said, “The two greatest forces for good in human history are capitalism and Christianity”, so it’s not surprising that he is a member of a church that is run like a fucking Fortune 500 company. As Jesus famously said, “Love thy neighbour as thyself and be sure to sign up to my weekly stock tips newsletter – just $99.95 a month, cancel any time”.

Notably, as both Immigration Minister and a member of Hillsong, Alex Hawke is the only MP who can say ‘Fuck off we’re full’ while speaking in tongues.

Hawke briefly rose to international fame earlier this year when he was required to make a decision on Novak Djokovic’s visa. A complex case reliant on multiple legal principles, Hawke spent days carefully avoiding thousands of pages of evidence, before holding a focus group and arriving at a conclusion – cancelling the tennis star’s visa and sending him to play at the Manus Island Open.

Hawke was praised for his decisive handling of the crisis. As Scott Morrison famously said at the time, “We will decide who comes to this country and the circumstances in which we can make the whole process as farcical and internationally embarrassing as possible”.

A member of Scott Morrison’s inner circle, Hawke has warmly been described by those who know him best as ‘corrupt’, ‘ruthless’ and ‘a cancer on the Liberal Party”.