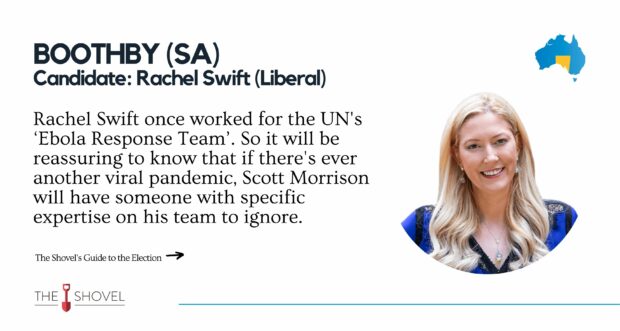 Location: Western and mid-southern suburbs of Adelaide (mainly taken up by the Westfield Marion carpark)

Profile: Retiring incumbent Nicole Flint has for many years been an outspoken supporter of the culling of wild animals such as sharks and crocodiles. She has, however, been strangely silent on what to do with Barnaby Joyce.

Her retirement opens the way for Rachel Swift. A medical expert, Swift once worked for the United Nation’s ‘Ebola Response Team’, so it will be reassuring to know that if there is ever another viral pandemic, Scott Morrison will have someone with specific expertise in his team to ignore.

Swift was also a healthcare industry expert for consulting giant Boston Consulting Group, meaning she has all the skills required to carve up and sell off Australia’s public healthcare system for profit when she’s Health Minister in a decade’s time.

Swift is up against independent Labor candidate Louise Miller-Frost, a mother of triplets, who is running on the Labor platform of fairness, or as she describes it, “you will share or I’m counting to five and then I’ll take it away”.

Independent Jo Dyer is also contesting this seat. Last year Christian Porter was ordered to pay $430,000 in court costs to Jo Dyer, in what Porter described as a humiliating backdown by Jo Dyer.

The most marginal electorate in the South Australia, expect Scott Morrison to do something weird at a hair salon in Marion at some point during the campaign.