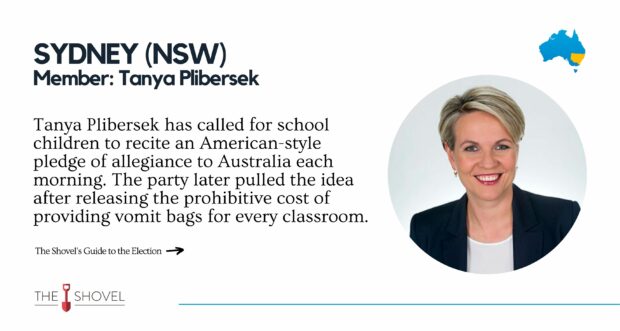 Opponent: Some unfortunate Young Liberal who lost a bet

Profile: A former deputy leader of the Labor Party, Tanya Plibersek pulled out of the race for leader following Bill Shorten’s resignation in 2019, saying she didn’t have what it takes to beat Albo or Scomo – specifically a nickname ending in ‘o’. Plibersek said she considered running as ‘Pilbo’, but in the end decided to opt for self-respect.

Plibersek has long been an influential policy maker in the party. In 2020, in a desperate attempt to shake off the image of a nation-hating lefty and appeal to the patriotism of middle Australia, she called for school children to recite an American-style pledge of allegiance to Australia each morning. The party later pulled the idea after realising the prohibitive cost of providing vomit bags for every classroom.

As a compromise, Plibersek suggested children recite the key outcomes from Labor Party focus groups each morning, as follows:

“I pledge my loyalty to the findings of the most recent Labor Party research findings, and to the insights of ordinary, quiet, fair dinkum, hard-working mum-and-dad voters, whose values I share.

“I understand that, at the time of the latest research, 61% of voters in the important 55-79 year-old demographic say they are uncertain about Labor policies – particularly with regards to franking credits – and may respond better to US-style jingoistic bullshit.

“I acknowledge the importance of an ongoing commitment to values, except when internal polling suggest I should abandon those values, in which case I will say or do whatever the fuck is necessary to gain an extra vote”.

The pledge will be implemented should Labor win office at this election.