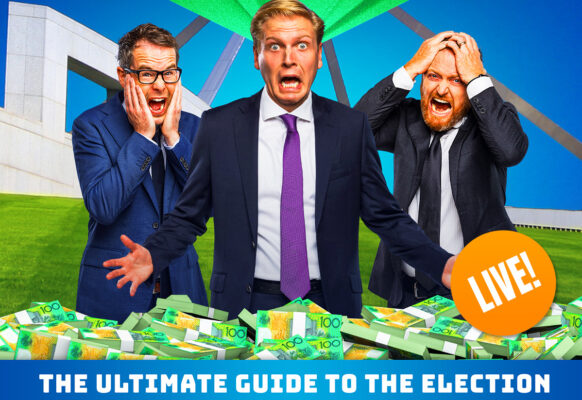 This election Australians face a clear choice: on the one side of politics, a Sydney-centric, league-obsessed, beer drinking, middle-aged Aussie dad with a cringy nickname and no policies, and on the other, Scott Morrison.

To help you get your head around all of the policies, photo ops and manipulation techniques we’re doing a string of live election shows across the country over the next few weeks.

Featuring The Shovel’s James Schloeffel, The Chaser’s Charles Firth, and ABC 7:30’s Mark Humphries, we’ll tackle the big questions. Like, will Morrison be able to pull off back-to-back miracles? Which desks in Parliament House are safe to touch? What photo-op pairs best with covering up a sex-scandal? And what on earth is an ‘Anthony Albanese’ anyway?

Book your seats now for this very special live event.