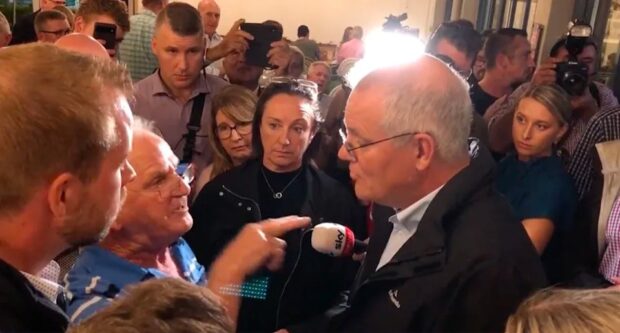 Saying he would be “a great cultural fit”, Liberal Party MPs have offered a Newcastle pub patron a full time cabinet position, after a video of him mercilessly berating the PM in classic Liberal Party fashion went viral.

High level cabinet members have said that the man “clearly has what it takes to be a Liberal Party MP in 2022” thanks to his “advanced ability to insult the PM as he stands there limp-dicked and speechless.”

“The guy is a natural,” one Liberal minister said. “The way he gave the Prime Minister shit, and he just had to stand there and eat it, you’d think he’d been a Liberal MP his whole life!”

Deputy Minister Joyce was less than enthused about the appointment, saying the man had stolen his lines. “Telling the PM that he ‘better fucking do something’ and that he’s ‘sick of his bullshit’ has been lifted straight from my text messages”.

The PM has a different recollection of the event, telling reporters he had “a lovely chat to a constituent who commended me on the great job I was doing before I offered him a cut and wash.”

The Newcastle man is slated to replace Keith Pitt as the Minister for Resources and Water, who to date hasn’t said anything vaguely negative about the PM.