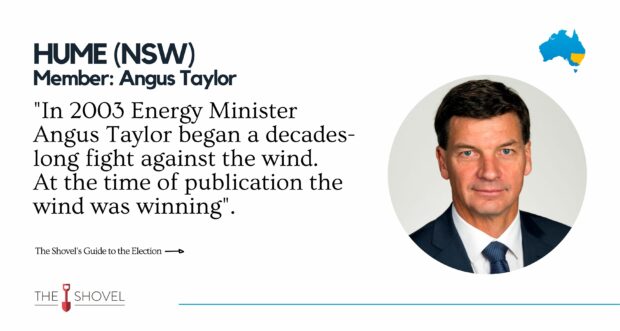 Key rivals: The wind and the sun

Favourite Movie: Catch Me If You Can

Profile: Angus Taylor left his 20-year career at consultancy firm McKinsey in 2012, saying he wanted to make a difference in the world. He then changed his mind and joined the Liberal Party instead.

A popular member of the Coalition, Taylor’s political career has been filled with highlights. In 2019 he was accused, along with Barnaby Joyce, of using $80 million of taxpayer money to buy 29,000 gigalitres of water from a company of which he was once a director. He was cleared of wrongdoing after it was revealed the water was purchased to treat Barnaby’s thumping hangover.

In the same year Taylor was accused of forging a document to discredit Sydney Lord Mayor Clover Moore. He denied the claim and later produced a letter signed by Nelson Mandela attesting to his good character.

In 2020, Taylor established a National Oil Reserve, purchasing $94 million of crude oil on behalf of the nation and cleverly storing it 12,000km away in the United States, ensuring it could be quickly accessed in the event of a crisis.

But even before joining politics, Taylor was known for his intellect. In 2003, he began a decades-long fight against wind. At the time of publication the wind was winning.

In 2017 Taylor attended a ‘stop the wind’ rally, which – while ambitious in its intentions – ultimately failed. The rally had to be abandoned when protesters’ placards were blown away in a 40km/h gust, leading the assembled crowd to frantically run in all directions.