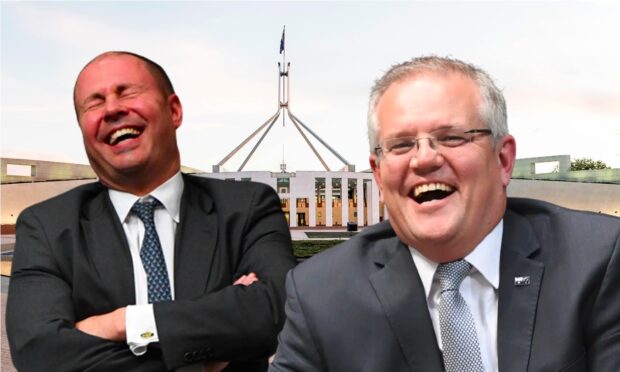 Australia’s Federal government is a joke, it has been revealed.

“I can’t believe you guys fell for it actually,” Josh Frydenberg said on behalf of the government, describing what is thought to be the longest set up ever for a joke.

“We’ve been giving so many hints along the way. Bringing pieces of coal into Parliament, promising to build carparks in marginal electorates but then not actually building them, nipping off on holiday when the country is in crisis. I thought we were being too obvious to be honest.

“But then over the past few weeks we decided to dial it up even further … to give people one last chance to figure it out. We had people calling the PM a psycho. Concetta Fierravanti-Wells literally stood up and said – in Parliament – that the Prime Minister was unfit to be Prime Minister, and no-one twigged. It was right there in her speech!”

He said there have been clues stretching back years. “I mean really – a government that covers up an alleged rape, backgrounds against the victim’s partner, calls the victim a lying cow, sends the minister in question on paid leave and then claims to be listening to women. I mean it’s simply not plausible that a government would do that,” he said.

“And that’s just that start of it. We totally fucked up the vaccination roll-out during the biggest pandemic in 100 years, when that was literally the only task we had. And then 12 months later we fucked up the roll out of rapid antigen tests. You can’t make that sort of shit up … actually, turns out you can”.

The Treasurer said the prank had been years in the making. “Oh yeah, from day 1 we were setting this up. Do you remember a few years back when I misplaced $60 billion? Billion, not million. That’s more than the annual GDP of a lot of countries. I personally thought it was too ridiculous, but the guys said give it a go and see what happens. And everyone just went along with it”.

Mr Frydenberg said he thought sending people away on empathy training courses in 2021 would be the straw the broke the camel’s back.

“I thought we were going to give the game away to be honest. It was too much. I even said to the guys, ‘Let’s just hold off on this one, it’s too ridiculous, we’ll get found out.

“But they proved me wrong, because they went ahead with it anyway. Let’s be clear here, empathy courses aren’t even a thing. It’s just something we made up! And then, after all of that – and this is where I thought the whole thing was going to fall over – Morrison comes out and says, ‘I’m listening to women!’ For real! I’m crying!

“But everyone fell for it and we’re still in government, so I guess we’ll just keep going”.