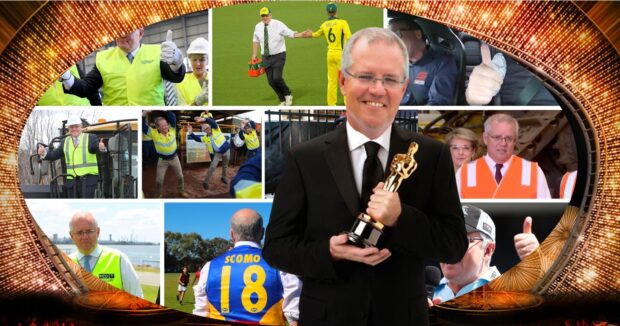 But critics said his most impressive acting achievement was his transformation from a rich rugby-union-supporting landowner from Sydney’s eastern suburbs to a rugby league obsessed bogan from The Shire. “The way he can just put on a Sharkies hat and then instantly transform into this totally different character from suburban Australia – it’s amazing,” one critic said.

While Morrison has never actually had a leading role, his zany costumes and slapstick acting mean he often gets the most screen time. “I’m basically acting the whole time. I’ll do anything, say anything, put on any costume, if it helps with the narrative,” he said.

Morrison does all of his own stunts, supported by a team of makeup artists, image management consultants and scriptwriters. He said he is willing to take on just about any role, although made it clear he would never hold a hose.