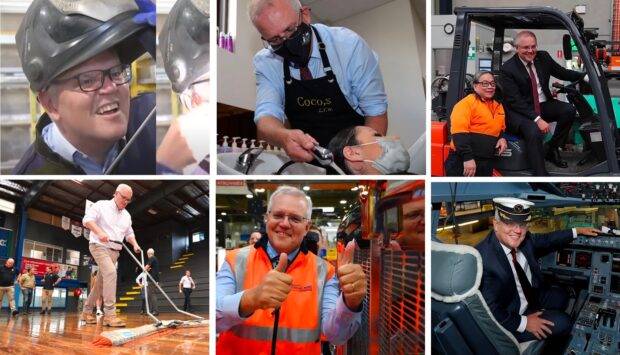 Australia’s employment market has continued to strengthen, with an extra 77,000 new jobs created in February, most of those for two-minute photo ops of the Prime Minister pretending to work.

In the last quarter alone Scott Morrison has worked as a hairdresser, truck driver, welder, basketball court sweeper, airline pilot, tank driver and builder, and in doing so has single-handedly increased Australia’s employment numbers to their highest levels ever. Analysis by the Department of Education, Skills and Employment shows that in total Morrison has taken on over 40,000 new roles.

Employment Minister Stuart Robert said the figures were an ‘extraordinary’ result.  “Australia is one of the few countries to have more people employed now than pre-pandemic, and we can thank our Prime Minister for playing a huge role in personally taking on so many of those new jobs,” he said.

The PM said he was happy to play his part in kick-starting the nation’s jobs market, and looked forward to pretending to do thousands of other jobs in the lead up to the federal election. He would not confirming when he was planning take on the role of Prime Minister.