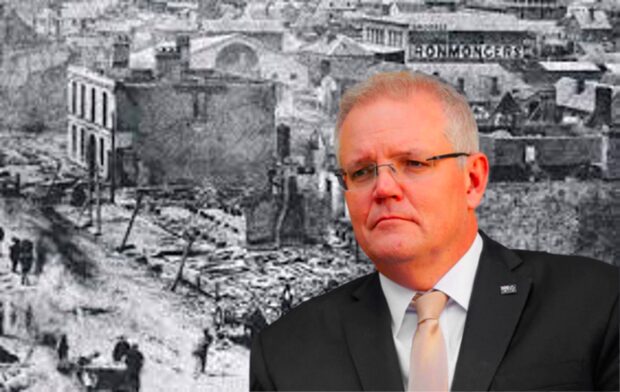 Saying he wanted to get on the front foot before things got out of hand, Scott Morrison has declared a state of emergency in Queensland in response to the Great Fire that ripped through Brisbane 158 years ago. The fire is confirmed to have caused more than £60,000 in damage.

“Some of the charcoal drawings we’ve seen coming out of Brisbane are tragic and very concerning and I think it would be reckless of me not to declare an emergency today,” the PM told a press conference.

“Premier Anastasia Palaszczuk insists that Federal help is not needed to extinguish the coals and sweep up the ashes of Brisbane, but I’m not going to sit around and wait for her to give the green light,” he said.

Morrison rejected the idea he had been slow to respond to the tragedy, saying he was required to wait on orders from the King via carrier pigeon before declaring an emergency.

“As you would know, the battalion of the King’s musket men have set sail by order of His Majesty and are expected to arrive in 4 months, should kind winds prevail”. He brushed off criticism that he has used the tragedy to have oil paintings commissioned for publicity ahead of the next Federal election.

Police and politicians have appealed to conservative media outlets to please stop reporting that the fire was arson at the hands of the Jack Hall gang, given the root cause of the inferno had not yet been established.