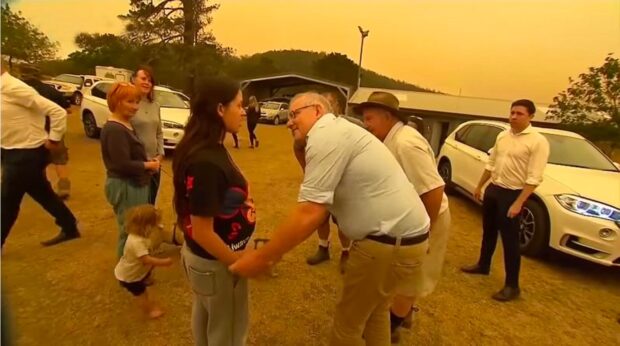 Flood affected residents across South-east Queensland and Northern NSW have received a much-needed reprieve after it was confirmed that Prime Minister Scott Morrison would not be visiting to forcibly grab their hands place it in his and move it up and down for the cameras.

One Lismore resident said it was a silver lining. “It’s been tough. My house and business are underwater, people are heartbroken and while we’d love to see a bit of support from the Federal Government, we are just so relieved that it won’t be in the form of a weird, forced handshake”. Another resident said, “Yeah if he came by, I was planning to put myself back up on the tin roof where he couldn’t get at me.”

While Morrison has been criticised during his tenure as PM for failure to even be in the country during major, community-destroying weather events, the residents of Brisbane were happy to support his COVID recovery if it meant he wouldn’t turn up and try any manual labour for a photo shoot.

Brisbane Lord Mayor wished the PM a speedy recovery, but added, “It’s already a shitshow up here without him trying his hand at another blue-collar job. Given he nearly blinded himself welding, I really don’t want the Mr. Bean of Prime Ministers reversing a truck into a small business or accidentally releasing a million megalitres of water from the Wivenhoe dam.”