CLOSE
The Nation
Taxation to be replaced by ‘GoFundMe’ campaign, Government confirms 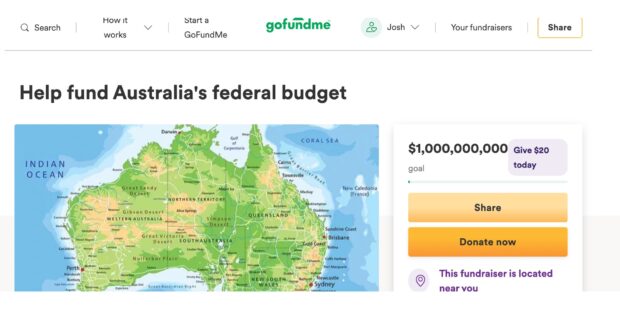 Australia’s taxation system will be completely dismantled and replaced by a single request for funds on a GoFundMe.com page, Treasurer Josh Frydenberg has confirmed.

The move comes following senior Coalition minister Peter Dutton’s decision to create a fundraising page for the Queensland floods in his electorate, rather than use federally available disaster funds collected through taxation.

“We had a look at what Pete did over in Queensland with the floods and we thought, that’s clever. If he can bypass taxation for disaster relief, there’s no reason why we can’t use the same process to collect funds for our healthcare system, education system, welfare spending, aged care facilities and national defence. It certainly cuts down on my workload,” Treasurer Josh Frydenberg said.

Prime Minister Scott Morrison said the initiative would provide funding opportunities for schools, hospitals and communities. “It’s great. I’ve always thought – if only there was some sort of centralised organisation that could collect money from people across the country and then allocate that money according to needs. Wouldn’t that be great? And now Peter has gone and found the solution”.

Under the new system people will be encouraged to donate what they can, with an initial target of $250 billion. Treasurer Frydenberg said he would run an eye over the numbers once a year. “I’ll pay our wages, dish out a few grants to some mates, pay off the submarines and then whatever’s left over we can use for essential services”.

At the time of publication no members of the government had contributed to the fundraising effort.