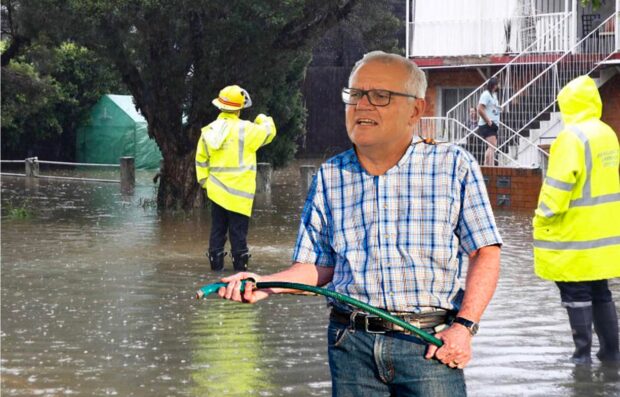 Saying he had learnt from his previous failures to help out during a crisis, Scott Morrison today headed to flood-ravaged south-east Queensland for a photo opportunity of him holding a short piece of hose.

Trying hard not to get his RM Williams wet, the PM told journalists that what Queenslanders needed more than anything right now was a picture of their Prime Minister holding a water distribution device.

“Now I know I’ve been criticised before for saying I don’t hold a hose. But I’ve listened to that and I’ve learnt from that. Which is why when someone told me there was an emergency unfolding in Queensland and northern NSW I turned to my media team and I said, ‘Here’s our chance to turn things around. Go grab that hose prop we bought back in 2020’”.

The Prime Minister – who doesn’t work weekends – said he wanted to get up to Queensland at the first opportunity. “As soon as I heard there was a disaster last Thursday I knew I had to be up there first thing Monday afternoon”.