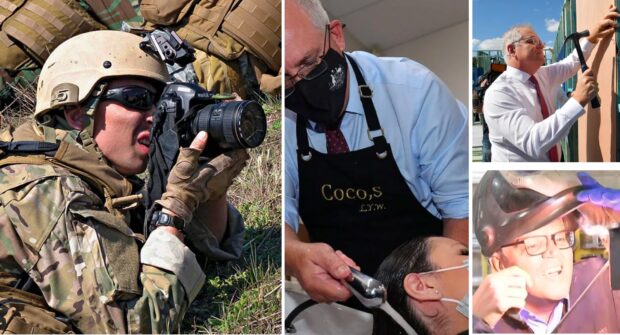 Australia was amongst the first nations to offer support to an under-siege Ukraine today, when Prime Minister Morrison said he had a highly-trained ‘special photo-ops’ unit he could deploy to the troubled Eastern-European region.

“These guys are our top operators – the best in the business,” Mr Morrison told a media conference this morning. “They’re highly trained, highly equipped, specially selected men and women who can get a professional photo op up and running in minutes”.

He said that they often deployed unconventional techniques not used by the opposition. “They can be dropped into any location – whether it’s a welding factory, a rugby field or a hairdressing salon – quickly sum up the situation, and have three to four creative ideas ready to go before the opposition has even got wind that they’re there”.

While the group works together as an elite team, they are made up of specialist operators with dedicated skills. “We’ve got photographers, stylists, make-up artists, props managers, social media coordinators – all of the specific skills you need to win out there on the battlefield”.

The PM explained that the unit’s weapon of choice was distraction. “They use sophisticated techniques to distract the enemy. One minute you’re losing the war, then these guys come in and BAM! everyone’s talking about you washing someone’s hair.

He said the offer to send in the photo-ops team would be made available after the federal election.