CLOSE
The Nation
Scotty to give open-heart surgery a crack 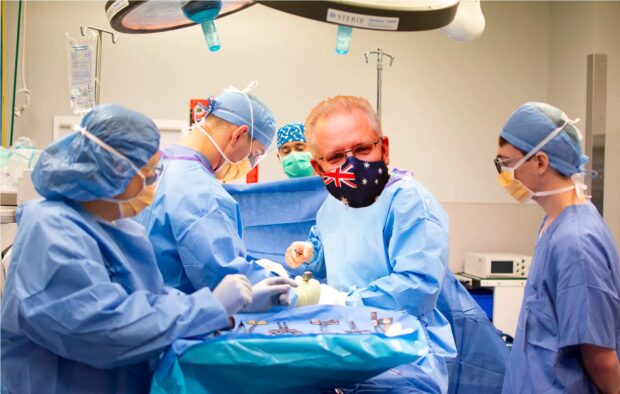 After trying his hand at just about every trade in Australia except political leadership, perennial work experience kid and occasional Prime Minister Scott Morrison says he’ll give a triple bypass a crack today, noting that a complete lack of experience has never stopped him before.

Taking off his gloves and mask in order to get a closer look inside the patient, the PM – who has tried welding, hairdressing, building and truck-driving this month alone – said the fact he has no experience in advanced medical procedures isn’t an issue. “I’ve got absolutely no idea what I’m doing. Literally I’m just poking different implements around this person’s heart in order to get the right angle for the photographers. But a lack of competency or experience is never something that’s held me back before,” he said.

Smiling for the cameras, Morrison shouted ‘Back on the tools again!’ before accidentally dropping a scalpel into the man’s chest.

The PM said it was critical to focus on what Australians see as the important issues. “Sure, this patient here may die today, but at least I’ll get a good image to lead the news this evening and distract from the total lack of any other policy or action from my government”.

He rejected claims he should be focused on other issues. “What’s more important? This man’s heart or the fact that my approval ratings are tanking?”

He is yet to try his hand at being Prime Minister.