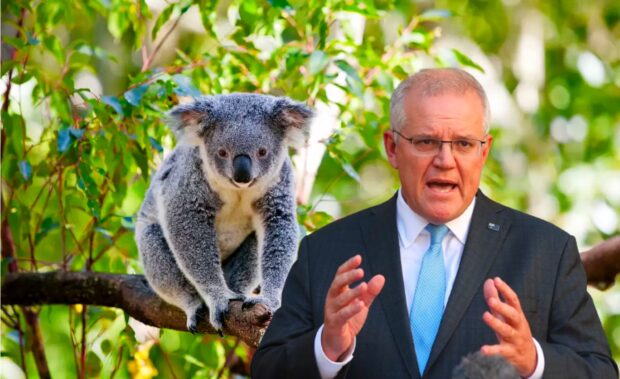 Koalas were officially listed as an endangered species in Queensland, NSW and the ACT yesterday, but the PM has labelled the listing as unnecessarily alarmist and says Australia leads the world in koalas.

“Some people always want to look at the negatives with a thing like this. But the truth is, if you look at our counterparts in Britain, in the US, in the EU, even in New Zealand, we are well ahead – miles ahead in fact – in terms of the number of koalas currently in the population. That’s something to celebrate”.

Mr Morrison pointed to a graph which showed Australia’s koala population compared to that of other OECD nations. “Despite losing a third of our koalas since 2018, we’re still number one. That’s an extraordinary achievement which Australians can be proud of. So to all of the environment groups out there trying to put a negative spin on this, I’d say ‘where would you rather be?’ Because I can tell you there aren’t too many koalas in Britain or the US right now”.

Environment Minister Sussan Ley said other countries looked to Australia as the model environment for koalas. “I often get phone calls from my counterparts in the US or Britain wanting to know what on earth we’re doing with our koalas. And it’s true – you go to Los Angeles or London and it’s incredibly rare to see a koala there these days”.