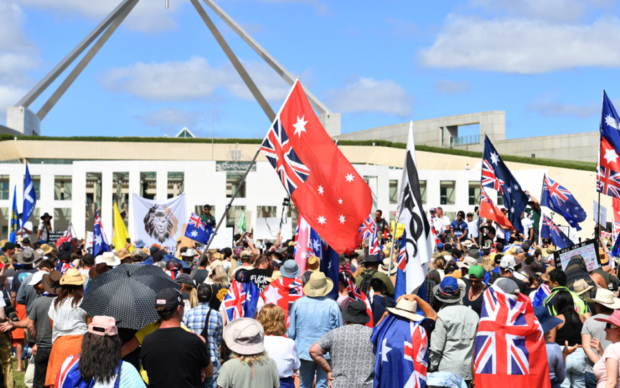 As the Convoy to Canberra protests entered their second week, organisers were starting to wish there was some sort of mechanism available to them, preferably in the next few months, that would enable them to have their say on who leads the country.

Keith Collins, who travelled from Queensland to be part of the protests, said he’d had enough. “Day after day we come here calling for a change in government. But no-one’s listening. What we need is some sort of national poll – a nation-wide vote for example – where we could say ‘ok, who do Australians want in charge here?’ But it’ll never happen”.

He said he’d given the idea a fair bit of thought. “I’d be pretty easy to organise. You’d just get bits of paper printed out with the different options, and then get people to make their choice, then put all the bits of paper in a big box and count them up”.

Collins said the idea was gaining traction on 4chan. “I posted my thoughts on there last week and a lot of people reckon it’s a brilliant idea – can’t believe no-one’s thought of it before. But of course there’s no way the government would allow it to happen”.

Nancy Teragal, who joined the protests last week, said the idea had merit. “You could run the votes in town halls … or even in primary schools”.

“Set up a barbeque to make it a bit of fun,” Collins added.

“But it’ll never happen. Not in a million years,” Teragal said, returning to the protest.