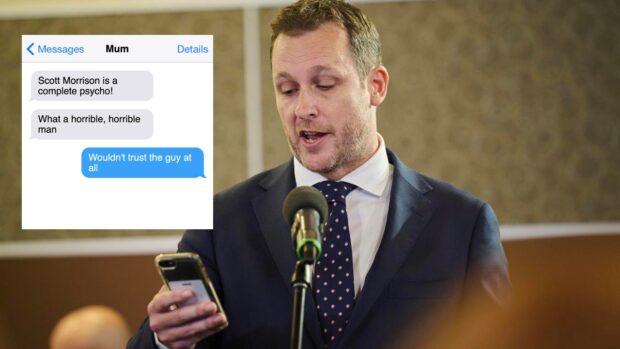 Saying they distinctly remember writing in a text that the Prime Minister was a ‘complete psycho’, millions of Australians were this morning trying to work out how the fuck Channel 10 journalist Peter van Onselen was able to access the private messages on their phone.

“It’s pretty scary,” Adelaide woman Katie Lambrook said. “Two weeks ago I’m texting my Mum saying that Scott Morrison is a ‘horrible, horrible man’ and next thing I know this guy from The Project is reading it out at the National Press Club. How did he do that? I never gave him permission to see my phone”.

People across the country had the exact same reaction, saying it was unnerving to see van Onselen read out their private conversations. “When I text a mate saying that the PM is a total fraud and that I don’t trust him at all and that he’s got no people skills, I don’t expect those messages to then be read out live on TV,” one man said, summing up the reaction of millions of others.

Others say they were misrepresented. “He referred to me as a ‘senior cabinet Minister’, what the fuck?” said 21 year-old Naomi Lincoln, on hearing her message read out about the Prime Minister not caring about people.

Mr van Onselen said he would not reveal his sources, but did say he would be willing to reveal the eight people in Australia whose phone did not contain the phrase ‘complete psycho’ when referring to the Prime Minister.