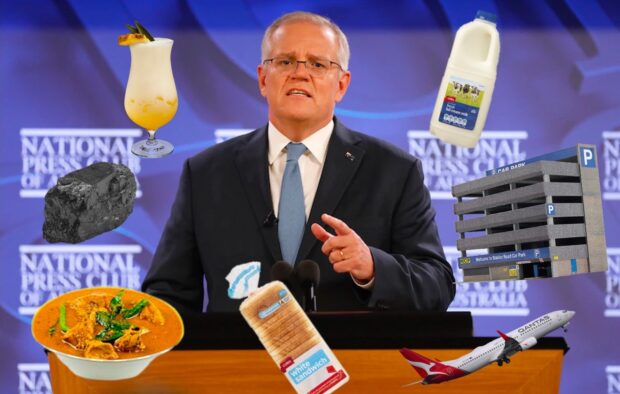 While most of us pop down the shops to buy a litre of milk from time to time, Scott regularly ducks out to get some professional advice on how to mimic the emotion of an ordinary human being. Over the course of a year, that costs the taxpayer the very reasonable price of $190,000, or around 140,000 litres of milk.

A donation from a coal mining company

No-one is going to bring an actual fucking lump of coal into Parliament for a bit of fun – you need to get paid good money to do that. As Scott can tell you, Adani alone paid the Coalition $247,300 in the financial year 2018-19 – about $61,000 for each minute of his funny little stunt.

A multi-story carpark in a marginal Liberal electorate

The colours on those grant spreadsheet print-outs certainly help in making the numbers stand out. As Scott Morrison said after the Press Club address: “Look, I don’t know the price of a loaf of bread, but if you’d asked me the price of a multi-story carpark in a marginal Liberal electorate I could’ve given it to you down to two decimal places”. The total cost? $650,000,000.00 to be precise.

Most of the time Scotty sends Jen to grab some pina coladas from the poolside bar at Waikiki. But once every holiday Scott will make a big show of getting off his deck-chair, pulling out his wallet and buying a round himself.

A gas-fired power plant in the Hunter Valley

In March 2020 Scott Morrison appointed Nev Power – a former Fortescue Metals chairman and a current chairman and shareholder in a gas exploration company – to head up the National COVID-19 Commission Advisory board. The Commission’s job was to provide advice on Australia’s economic recovery. The Commission’s recommendation? To fund gas projects (we’re not making this up). In May 2021 Scott Morrison confirmed the government would be funding a $600 million gas-fired power plant in the Hunter Valley. It’s a nice big round number, and one that sticks in the head.

An airfare to a mate’s wedding

In 2013 Scott was busted claiming $354 of taxpayer money to travel to a mate’s wedding in WA. Of course, he would’ve had no idea of the cost at the time – his staff would’ve done the paperwork. But when you’re later caught out and then asked to pay it back out of your own money, it’s something you’re likely to remember.

A second-hand COVID-19 vaccination from Poland

When you forget to buy enough vaccines during the worst pandemic in a hundred years and you’re left scrambling to buy them on eBay and Gumtree, you become very aware of the going price. Scott hasn’t revealed what it cost for the about-to-expire vaccines he bought from Poland and Singapore, but we’re pretty sure he paid overs.

A chicken tikka from the Jewel of India

Scotty loves to play dress ups and post pictures of the ingredients from the curry ‘he’s making’ tonight. But obviously he can’t be fucked to actually do the work and cook the bloody thing. Luckily, Jewel of India does a mean chicken tikka for $19.90, delivered and ready to be photographed.