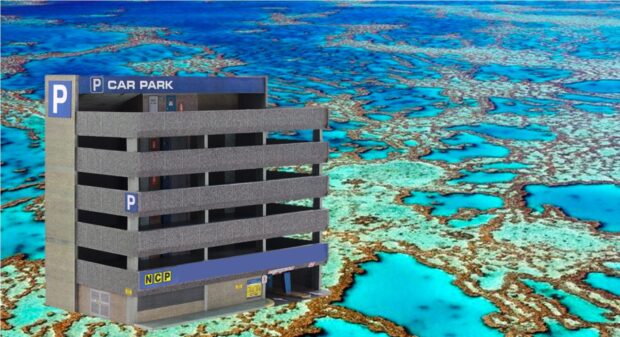 Following today’s earlier announcement of a $1 billion investment in the Great Barrier Reef, the Federal Government has provided specific details of how the money will be spent, outlining plans for a much-needed car park in the heart of the reef.

Scott Morrison pointed out that there is currently no parking whatsoever in the reef, thanks to years of state and federal Labor government neglect. The PM said the new money would be targeted to ensure it has the greatest impact in securing a sizable distraction before the election and meet the highest standards of misappropriation the Australian people had come to expect from the Coalition.

Environment Minister Sussan Ley said the money will help protect more than 64,000 votes in Queensland without acknowledging that UNESCO has tried to label the Great Barrier Reef as ‘in danger’ for years. “This is the biggest investment in car parking in a coral reef anywhere in the world,” Ms Ley said.

With much of the reef now bleached white, Ms Ley said the Government was well aware of the need for more colour. “And if you were to look at the colour-coded spreadsheet we used to determine this funding, you’ll see we’ve included every single colour in the rainbow”

​​Ms Ley said UNESCO officials had been invited back to examine the car park and will be first to use it.