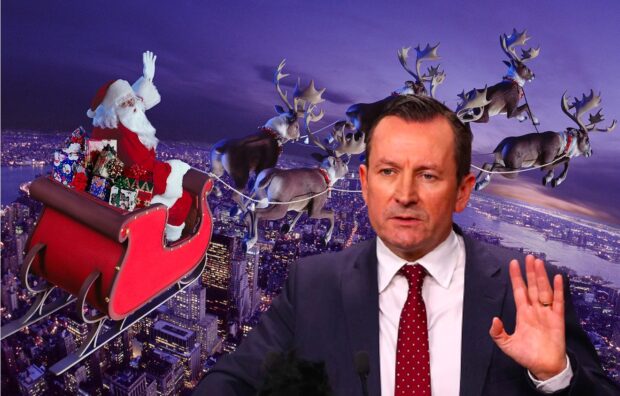 Western Australian Premier Mark McGowen says there will be no special treatment for Christmas delivery figureheads, banning Santa Claus from the state due to ‘a dubious travel and vaccination history’.

While not naming Mr. Claus explicitly, Mr McGowen acknowledged that his state had received a G2G application from a man in his 80s from the Arctic circle arriving by air, who had requested an essential freight worker exemption. Despite having a double dose of the Elf-developed JingleVax, the Premier suggested that the man’s sporadic travel history was worrying.

“Despite this individual’s plan to visit WA first and then head to the GST-hogging Eastern states, the risk of a major seeding event is too high. I make no apologies for keeping Western Australia safe,” McGowan said, while wearing a red beanie with white trimmings as a sign he was loosening up ahead of the festive season.

Mr McGowan also said that given he had not provided an exemption earlier in the year to another man in red, Anthony Albanese, he had to be consistent: “I didn’t allow Albo in at election time, and at this time I would again suggest West Australians don’t need to be distracted by an old man with nothing new to say”.

West Australian parents are now grappling with the repercussions of the Premier’s decision and face the reality of a DIY situation for the 2021 present deliveries. Perth’s Kmart and Big W stores were sold out of red suits at time of publication.

UPDATE: Santa was given a last-minute exemption to enter Western Australia after changing his name to ‘Kerry Stokes’.