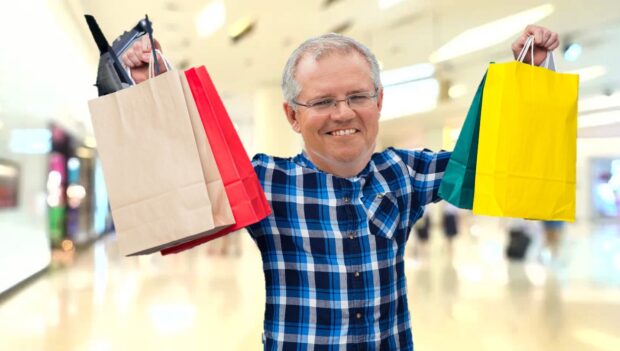 Scott Morrison and his cabinet are going all out on Christmas shopping this year, buying up Black Hawk helicopters, submarines (maybe) and a 1 billion dollar arms contract with South Korea in order to ensure they have ‘Labor Debt’ to complain about if the Coalition loses the election.

Morrison fought back against accusations that the purchases were self-serving, insisting that these are all gifts for the Australian people. Though when questioned about whether he will get an opportunity to be photographed in a Black Hawk the Prime Minister became visibly erect.

Treasurer Josh Frydenberg backed the Prime Minister. “Yes, these are big purchases, but let me stress that this money isn’t just being spent to buy expensive shoot-planes and sneak-boats, what we really need to do is mismanage the economy then declare a ‘budget emergency’ the second Labor get into power”.

“Many may argue that loading up the opposition with a mountain of debt before leaving office is a dirty political tactic, but it’s been our most effective to date,” Morrison said. “We’re trying a new version of this where we get some dickhead to shit-talk China, who we have no possible chance beating in any fight so that when we leave office we can bequeath the Opposition with a diplomatic mess, or maybe even a conflict with a global superpower. Then when they try to mend relations we say they are kowtowing to a foreign power even though we already lick American boots every time they illegally invade a country”.